The first flood of this very wet winter came on the 16th December. A week later we washed out the deposited mud and then watched as the water came into the wheelhouse again on the same afternoon. Our highest flood of the winter (we hope) came on Christmas Eve, this was a couple of inches below the record height of what we call the modern flood levels, i.e. since the restoration. The water covered the Mezzanine floor. Since then a series of floods have been in and out of the building. We have washed out after each, the result has been that no progress for our restoration works have been made since December. On the second Saturday in February we threw in the towel and called off all works for a few weeks or until the weather improves. 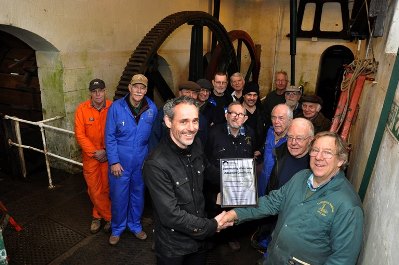 These rather wet conditions have dampened the members spirits, is there a pun there? We still managed to have our annual Christmas lunch in the workshop. Turkey with all the trimmings followed by Christmas puddings. This year, however was a little different as the Canal and River Trust has recognised the works done at the pumping Station by the Group by allowing us to formally adopt Claverton. Yes I realise that you could say that it’s a bit odd because group has been restoring and maintaining the pump House since 1968. The thing is that we are now in a new era since CRT came into existence and we had to move with the times to continue to enjoy occupying and working on the unique water pump that is Claverton. Mark Stephens has been very supportive since the change and has ensured that the present restoration is fully funded. Before we sat down to the Christmas Lunch Mark presented the Certificate of Adoption to us then even though he was not able to stay for lunch helped to serve the food to all around the table.

Another important milestone was recognised before the meal. I am sure that almost all who have worked at Claverton since the 1970`s will know Maurice Pullin. He has become part of the place and is a real character. His wit and knowledge is admired by all who have crossed his path. Maurice decided that he was too old to be a regular member of the team. I do not agree with this but will have to accept his decision. Maurice , our official photographer for the latter years, was presented with a very nice picture of a steam hauled train passing Claverton taken by Robert Coles. We hope to see Maurice occasionally at Claverton for many years to come. 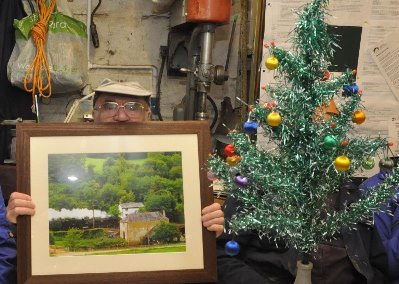 Maurice with his picture (©Robert Coles)